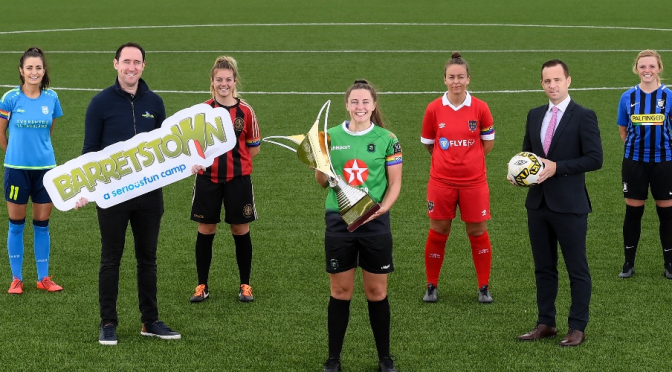 Section 2 of the league wrapped up while the title race in section 1 is still tight.

In a rehearsal for the FAI Cup final next month, Peamount kept their title hopes alive with a win against Cork. Early goals from McCartan and Duggan sent Peas on their way. O’Gorman scored just past the half hour mark to seal the win. Next week Peamount take on Shelbourne with the winner becoming league champions.

Wexford all but guaranteed a 3rd place finish with a win over Galway. Orlaith Conlon opened the scoring in the 17th minute. Ellen Molloy scored just before halftime time, with a super shot from outside the box that found the bottom right corner.

In a hard fought game Athlone picked up the 3 points to end their season on a high. Emma Donohoe got both goals for the home side.

DLR finished top of section 2 with a 0-3 win. They got their first in the 45th minute. Carla McManus got the second, her first goal for the club. Captain Catherine Cronin scored the 3rd late on.

The game kicks off at 6pm, and will be live streamed by the FAI.

Elsewhere Wexford Youths take on Cork on Saturday at 2pm.

Last weekend was the final scheduled round of phase 1 of the league. However there is still a game to be played in phase 1. During the week Peamount beat DLR Waves 3-2.

Shels secured the 2nd biggest win of this seasons Women’s National League, putting 7 past Treaty in Limerick. Two first half goals from Whelan, and one each from Grant and Murray put Shels in control. In the second half Gargan scored 2 and Dodd got another one.

DLR Waves hosted Wexford at the UCD Bowl. The opening exchanges were fairly even with both sides cancelling eachother out. The deadlock was broken through Belssing Kingsley’s goal which game out of nowhere. Aoibeheann Clancy scored off a rebounded freekick late on to seal the win. Wexford have finished in the top section of the league, despite still having a phase 1 game remaining against Galway.

There was a special guest at the UCD Bowl. Abi Ward has been working tirelessly to raise money for Pieta House and Focus Ireland. Abi has been doing 4K a day for 19 days, then on day 20 she is running a half marathon. Graham Kelly and the rest of the DLR Waves team invited Abi to the game on Saturday.

You can donate to Abi’s cause here.

Galway ended Cork’s winning run on Saturday. Lynsey McKey scored just before the hour mark, and then late on. Becky Cassin’s goal made for a nervy ending but Galway held out.

Bohemians got their first ever Women’s National League win to move off the foot of the table. Niamh Kenna got the goal.