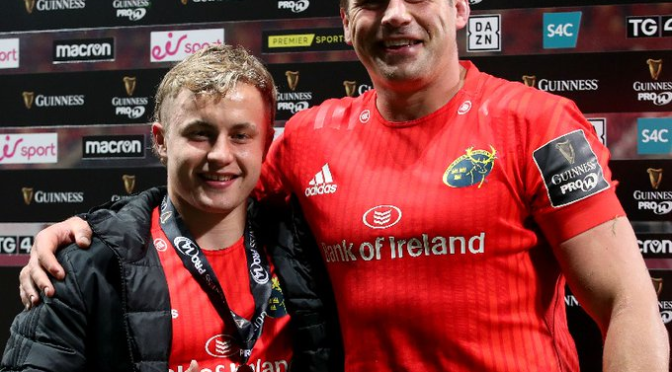 The top 2 in Conference B last season were Edinburgh and Munster, and it is likely to be those two again competing for a home semi-final. CJ Standers late try with Ben Healy once again landing a late kick meant Munster are 100% from their first two games.

Two penalties inside the first 5 minutes from Healy gave Munster the lead. But Mark Bennett’s try, converted by van der Walt put the away side in front. Healy kicked another penalty to swing the lead back in Munster’s favor.

Jack O’Donoghue thought he had scored but his try was rulled by the TMO. Edinburgh took advantage through prop WP Nel. Healy kept Munster in the game with another penalty. At halftime Edinburgh led 12-14.

Van der Walt and healy exchanged penalties before the former was shown yellow just before the hour mark. Healy kicked the resulting penalty. Bennett kicked a penalty during the sin binning before van der Walt returned to extend the lead to 23-18. With three minutes to go Stander found his way over the line with Healy adding the conversion.

A second big win in a row for Munster makes them early season favorites to top conference B.

Munster completed what will go down as a famous comeback against a strong Scarlets side in their opening Pro14 encounter. 14 points down, down to 14 men, with 15 minutes to go, the writing looked on the wall. Ben Healy had different plans kicking 10 points, including a penalty from the halfway line when we were over a minute and a half passed the clock going red.

The end of last seasons Pro14 would have been deflating, with two loses against Leinster, denying them a home semi-final and then a place in the final. You’d be forgiven if you were a Munster fan coming into this game with a pessimistic outlook, particularly when Scarlets took the lead with 17 minutes gone.

Halfpenny kicked a penalty to put the home side in front. Munster had territorial advantage after that, but a blocked grubber kick was hoofed down field. De Allande gathered the ball but while doing so carried it over the dead-ball zone. The 5-metre scrum resulted in another penalty for Scarlets, which Halfpenny converted. O’Mahony got his first card of the evening shortly after when he was shown a yellow for illegally entering a ruck. Scarlets got another penalty, which Halfpenny successfully kicked.

Munster would get back into the game. Andrew Conway created an opportunity as he so often does. He provided Jack O’Donoghue with the platform to finish off a counter-attack. JJ Hanrahan converted, making it a 2-point game. Halfpenny kicked another penalty to extend that lead to 5 points going into halftime.

Hanrahan and Halfpenny exchanged penalties early in the second half, before Halfpenny took his chances after repeated infringements to make it an 11-point game. And another to make it a 14-point game. Coming into the last 15 minutes it seemed that was that.

Munster fought back with Farrell getting a try which was eventually awarded by the TMO. The momentum was short lived as O’Mahony was shown a second yellow, which made red. Halfpenny kicked another penalty to stretch the lead to 10, now it really looked over.

Ben Healy kicked a penalty to narrow the gap, before De Allande won a penalty. They went to the corner, allowing Kevin O’Byrne to get over. The game was level. Then finally they had a penalty on the halfway line. Ben Healy kicked it to secure a famous victory.

Scarlets also started their 2016/17 campaign in the Pro12 with a home defeat against Munster. They went on to win the league that season, beating Munster in the final, after beating Leinster in the semi-final.

Munster look to have a new star in Healy, who will always be fondly remembered for this display. They will need to improve next week ahead of a big game against last years conference B winners Edinburgh, but this will live long in the memory.