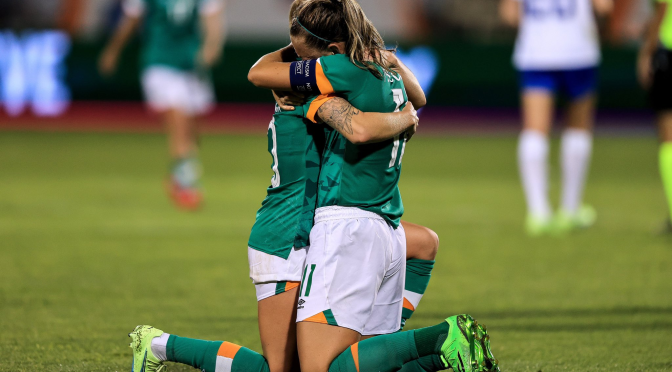 Last Thursday was momentous in Irish football. Ireland secured their place in a World Cup play-off with a game to spare. It’s not entirely simple as ahead of the final group game against Slovakia Ireland could find themselves playing anywhere between one to four games in the play-offs depending on how things turn out.

It was a rough start to the game. The opening half an hour saw Finland create more and have some clear-cut chances. Ireland finished the half the stronger but the break came at a good time.

Ireland came out strong in the second-half and made the break through. Lilly Agg had come on for the injured Ruesha Littlejohn at the end of the opening period, she rose highest to meet Megan Connolly’s long range freekick. Agg had no fear of colliding with the goalkeeper and headed over the on-rushing net minder to give Ireland the lead.

Ireland held out. It was edgy, it was tight, but it was a win, and it was famous.

And this is where Ireland need to be. This squad is good enough to compete for places at major competitions. This team has players playing at high levels and boasts some players like Katie McCabe and Denise O’Sullivan who could make any team.

We can all celebrate an incredible achievement.

So what comes next?

We’ll have a more detailed look at the play-offs next Wednesday in the Women’s Football Blast. Basically the immediate concern is whether Ireland will receive a bye to the second round of the European stage, or if they will have to play in the first round.

It was all a bit cloudy after the win on Thursday, but now there’s a clear path. The teams Ireland needed to drop points all did (including Austria who were beaten 0-2 by European Champions England). That’s a bit of luck we needed after the last qualification campaign where it was lacking.

What this means is if Ireland get a win in Slovakia on Tuesday they are guaranteed to be in the top 3 runners-up and will get a bye to the second round. The other 6 will have to play in the first round. The higher ranked sides will have home advantage.

Basically if Ireland win they will have a home game against a team with a worse qualification record. The rankings only take the results against the top 5 teams in each group as not all groups have 6 teams.

There are still potentially difficult games to go with multiple sides currently in position to play in the play-offs having already appeared at major tournaments, something Ireland has never done. And even if Ireland win their tie in the second round, they could find themselves having to go through the intercontinental play-offs, as only the two winners with the best record qualify automatically.

Two players come into the squad, Shelbourne’s Jessie Stapleton and West Ham’s Isibeal Atkinson are called up. While four players depart, with Ruesha Littlejohn, Niamh Fahey, and Megan Connolly injured and Jamie Finn being suspended due to having picked up three yellow cards.

So there’s still a long long way to go. But for now all the focus will be on Slovakia, that’s the next important step. This the first time Ireland have reached a play-off since 2009. There’s plenty of work to do yet but it’s already a momentous achievement.

One thought on “Path To The World Cup Becomes Clearer”