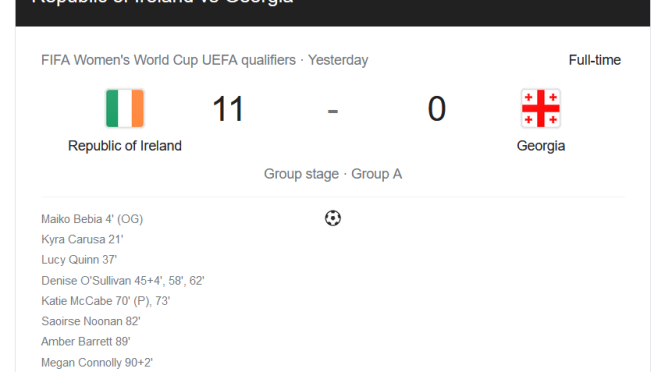 The Football Association of Ireland are set to investigate the Ireland WNT potentially breaching traditional protocol and actually playing well in a football match against Georgia, rather than playing like a shower of damp raisins.

In their World Cup qualifying group game on Tuesday November 30th Ireland beat Georgia by a score of 11 (Eleven) – 0 at Tallaght Stadium, with players failing to result to dreadful long ball tactics within the opening 10 minutes, as is tradition when Ireland’s men’s team have played Georgia in every 2nd qualifying campaign since time began.

A spokesperson has said:

In the past the men’s international side have set certain standards when playing against Georgia, namely acting like they’ve never kicked a ball when finding themselves in an attacking position. Furthermore it is questionable that the available players all played in the correct positions which they are suited to.

A further appeal has been made by the people of Ireland to run a DNA test on Katie McCabe and Denise O’Sullivan to ensure they are actually Irish, with their ability to play technically good football consistently at a high level casting doubt over whether there is actually any Irish blood in them at all.

Ireland finish the year 2nd in their qualifying group having played each team once. However your aul lad was not impressed.