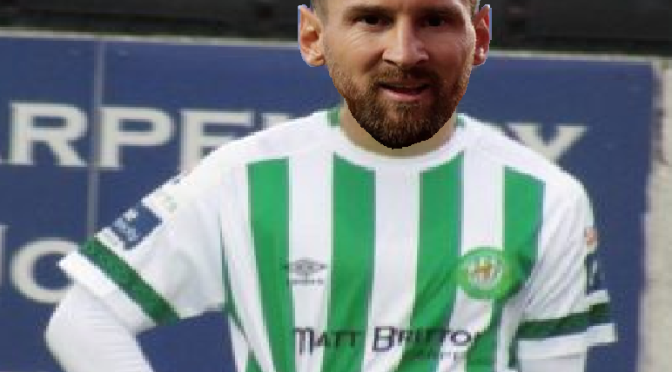 4 Champions Leagues, 10 La Liga titles, 6 Copa del Reys, 7 Supercopa de Espana’s, 3 UEFA Super Cups, and 3 Club World Cups. Add that to 6 Ballon d’Or’s, a World Cup Golden Ball, 6 European Golden Shoe’s, and a heap of other awards, Lionel Messi has been far from starved of accolades. However the magicians time at Barcelona appears to be up.

He’s been linked with plenty of big clubs; Man City, PSG, Inter, Juventus etc. But there is a frontier the supposed greatest player in the world hasn’t faced. The Greatest League in the World.

Which begs the question, can Lionel Messi be considered an all time great if he hasn’t mixed it with the Jack Byrne’s of the world? For all his goals, he has never scored on Gary Rogers. He hasn’t had to compete for the golden boot against the likes of Junior Ogedzi-Uzokwe, or Pat Hoban, or Chris Lyons. He’s never been able to tactically outwit Ollie Horgan. He’s never done it on a wet and windy night at the Ryan McBride Brandywell, or Eamonn Deacy Park. And he’s certainly never done this:

In short, we can’t consider Messi (or Rondaldo, Neymar, Mbappe, Lewandowski, and so on…) a great player if they haven’t played in the League of Ireland. Which means Messi has to prove himself on a stage bigger than any other.

But where should he go? Sure one of the top teams would be the easy answer, Dundalk are in the Champions League, Shamrock Rovers are top of the table, Bohs are in the mix. But Messi shouldn’t take the easy way out. He could go somewhere scenic like Donegal, or Galway, or Athlone (probably, is it? I’ve never been). But he needs to go somewhere he can make his mark. To truly fly high, Messi needs to become a seagull.

The only way for Messi to put himself ahead of Ronaldo for good, and rid himself of Maradona comparisons is to show he can do it at the Carlisle Grounds. There are a few reasons for this:

We could go on but the point has been made. Pull on the Green and White stripes Messi.

Throughout the season we have 2 domestic football podcasts a week. On Thursdays we cover League of Ireland, and on Fridays we cover Women’s National League. You can get the show on most platforms, including Spotify, Player FM, PodBean, Pocket Casts, or click Latest Episodes on our menu above.