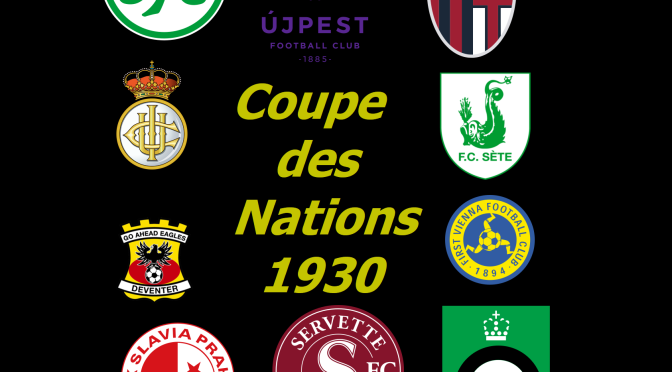 In this ongoing football series, we are looking at European club tournaments that came before the Champions League. The notion of a European Club competition has been around since the football grew in popularity on the continent. We have already covered the Challenge Cup and the Mitropa Cup. In this edition, we will look at the Cope des Nations.

Unlike the other tournaments covered in this series, the Coupe des Nations (Cup of Nations in English) was a one off event. The tournament was held at the same time as the first FIFA World Cup. Only 4 European countries sent a team to the World Cup (Belgium, France, Romania, and Yugoslavia), this tournament was viewed as an alternative. It was held in Switzerland.

Teams from most of the major footballing nations in Europe were sent. Austria, France, Italy, Netherlands, Spain, Switzerland, Belgium, Czech Republic, Germany, and Hungary were represented. The English champions Sheffield Wednesday were not invited as they had withdrawn from FIFA. Portuguese champions Benfica were invited but declined. The FA’s of Greece and Norway sent letters of complaint as their champions were not invited.

Vienna were Austrian Cup winners in 1929 and 1930. The had previously won the Challenge Cup and the Mitropa Cup. They have been Austrian Champions 6 times, winning the league for the first time in 1931. They currently play in the 4th tier of Austrian football.

Les Dauphins were French Cup winners in the 1929/30 season. They would later become champions of France on two occasions; 1934, and 1939. They play in the 4th tier of French football.

Bologna were Italian champions for the 1928/1930 season. I Veltri have won Serie A 7 times, most recently in 1964, and have won the Italian Cup twice. They previously won the Mitropa Cup on 3 occasions. They currently play in Serie A.

Go Ahead Eagles were the Dutch Champions for the 1939/30 season. They currently play in the 2nd tier of Dutch Football. They have been Dutch champions 4 times.

Txuri-beltz were the Spanish cup winners in 1927. They currently play in the 3rd tier of Spanish football. They have won 4 Spanish Cups.

Les Grenats were the hosts of the competition. They were Swiss champions in 1929/30. They have been Swiss champions on 17 occasions, most recently in 1999. They have won 7 Swiss cups. They currently play in the top tier of Swiss football.

Slavia Prague were Czech Champions. They play in the top tier of Czech football. They have been Czech champions 5 times., having also won the Czechoslovak league 13 times. They have won 9 Czech cups, most recently in 2019. They previously won the Mitropa Cup.

Lilák were the Hungarian champions, and had won the Mitropa Cup in 1929. They have won the Hungarian top division 20 times, and the Cup 10 times. They won 2 Mitopa Cups.

The tournament was played with knockout rounds. However, the losers of the first round played in a consolation round, with the winners advancing to the Quarter-Finals.

First Vienna, Fürth, Slavia Prague, Újpest, and Bologna all won their first round ties. As Bologna arrived late, they and their opponents Go Ahead Eagles received a bye to the Quarter Finals.

In the consolation round, Irún beat Sète and Servette beat Cercle Brugge. First Vienna, Újpest, Slavia Prague, and Servette all progressed to the semi-finals.

In the final, Újpest were comfotable winners beating Slavia Prague 3 – 0. Both teams played a 1-2-3-5 formation. János Köves scored a hatrick in the final. Újpest conceded just 1 goal, scoring 16, throughout the tournament.

In the next part of the series, we will look at the Latin Cup.